We run today 911 Operator Kickstarter campaign with Jutsu Games
Known polish site Gamezilla has stated in their article that PlayWay is one of the biggest kickstarter hatcheries. Different pledged games shows that this company knows how to run a successful campaign. A lot were pledged and this is just the beginning.

911 Operator is a game about the difficult work of emergency lines dispatchers. Manage the teams of policeman, medics and fireman to many different cases. Answer emotional calls and try to help people!

We plan to put over 50 different call types in the game - sometimes serious and dramatic, sometimes funny or irritating. Each recorded with emotions, and most often based on true events!

Each dialog has a few different flows, and it is up to you which way will you choose, according to the situation. Will you choose to use the caller to help, or will you tell them to wait for services to arrive? Will they come on time? Will you be able to provide correct First Aid Instructions? Or maybe you should tell the caller that it is not a case for 911?

During the conversations you will have to make hard choices. Sometimes you will have to provide real First Aid Instructions. This job is more difficult than you think, but we hope that you will learn some of the procedures as well.

Never know when they might be useful in real life!

But this is not all - other calls might be about ongoing crimes, drugs dealing, family abuses. We also covered fires and technical problems (like chemical hazards or people trapped in elevator). You will get confused why and in which situations people can call 911 :)

We made some rocket science to give an option to download and play on ANY REAL CITY in the world, thanks to OpenStreetMaps! Fight the crime and help people near your home in Free Game mode!

Choose any larger city like New York, London, Berlin, Moscow.... or any smaller one like Albuquerque, Kaposvár, Windhuk, Sandomierz. Your choice, it will work, as well as over 8000 other cities!

PS. The maps themself are not included in the game and can be downloaded for free.
The gameplay itself divides in two modes - management and duty.

During the duty mode your job is to answer the calls and dispatch adequate teams to the location, if you have them available. Together with the calls, you also receive other reports either from your teams or other operators. Each Duty represents a day of the operator's work. It takes about 10 minutes to play.

After the Duty mode, you go to the management mode - there you can recruit additional team members, buy vehicles and equipment and watch an after action reports, where you can find out what happened to your callers.

The main statistic of the game is Reputation, which goes up every time you successfully resolve a report, and goes down each time someone dies, criminals escape or you fail to resolve a report in given time.

Another statistic is money - which you can get for special awards (like saving life or by avoiding major failures) or by giving the tickets for each reported minor offenses.

There is a lot of content in the game, and more will come!

In the campaign mode, you will play on different cities like San Francisco or Wachington DC, facing growing threats and more and more challenging tasks. Will you manage to operate 20 teams at once.

Some of the planned missions include: large sport events, protests, international government summit, drug mafia activities, terrorists attacks, natural disasters like earthquakes, floods and fires. Each will have corresponding calls and reports, which you will have to handle correctly in order to advance to next level

We made a great effort to prepare a large, organized list of things that can happen in your city - starting from a cat on a tree, through injuries, fires, bombing and terrorist threats, accidents and natural catastrophes!

Each of those reports require different reaction time, priority, other teams types, number and ordering, as report elements might interlock each other

Each of the emergency services has it's own set of vehicles and equipment, with adequate properties like speed, number of places for criminals or injured, and some additional effects!

We are a small company of 5 people based in Warsaw, Poland. We are making our way into proffessional game development now. We really enjoy innovative gameplays and... maps, as you can see on Our previous project, Modern Wizards

We really enjoy innovative gameplays and... maps, as You can see on Our previous project,Modern Wizards

In our team we have Ian, our operator's voice, was an actual emergency services dispatcher in Canada. Among our developers, we have Peter, who also used to work as Fire Department Dispatcher, and Bartek, who worked over Police Information System project.
We also consult the game content with professional policemen and medics, so do not worry about the reality of the game!

Here is the trip plan for our game. We need some more money to make more content and implement optimized version for mobile devices. Mobile version should be available in February 2017 then.

VR version might look unbelievable, but we want to give a possibility to feel like you are actually sitting in the Dispatcher's Operations Center instead of your own comfortable room :) Also, Oculus promised us support and already gave us hardware for the development!
Finally, there is a Multiplayer version! That will allow you and your friends to cooperate and manage the teams in the same city, at the same time, to fight crimes and save lifes together. We also plan to integrate Twitch and allow other types of cooperations ;)
So, if you want this great 911 game to be created as much as we do, support us! We are here thanks to PlayWay, a company that is favourably disposed to that game. They have promised that if we manage to raise money on Kickstarter, they will give us twice as much. Fair deal, isn’t it?

With Playway as our investor and the initial boost provided by Kickstarter, we will be able to deliver a gaming experience you have never seen.
We already have some part of game, all we want now is to polish things and develop additional levels. With your help we can do this.

Congrats to our dev studio - Jutsu Games.
They won most prestigious indie game award in Poland!
"911 Operator" beat 60 other indie games in the contest.

911 Operator
The game about the difficult work of people that manage emergency lines and services.
Main task is to answer incoming calls and to react properly ­ give first aid instructions, advise, dispatch correct number of firemen / police / ambulances , or sometimes ­ just ignore the call.

Key Features: ­
- Over 50 different dialogs ­ sometimes serious and dramatic, sometimes funny or irritating
- Real First Aid Instructions and procedures
- Option to download and play on ANY REAL CITY in the world! ­
- 10 carefully prepared cities in campaign mode with specific events. 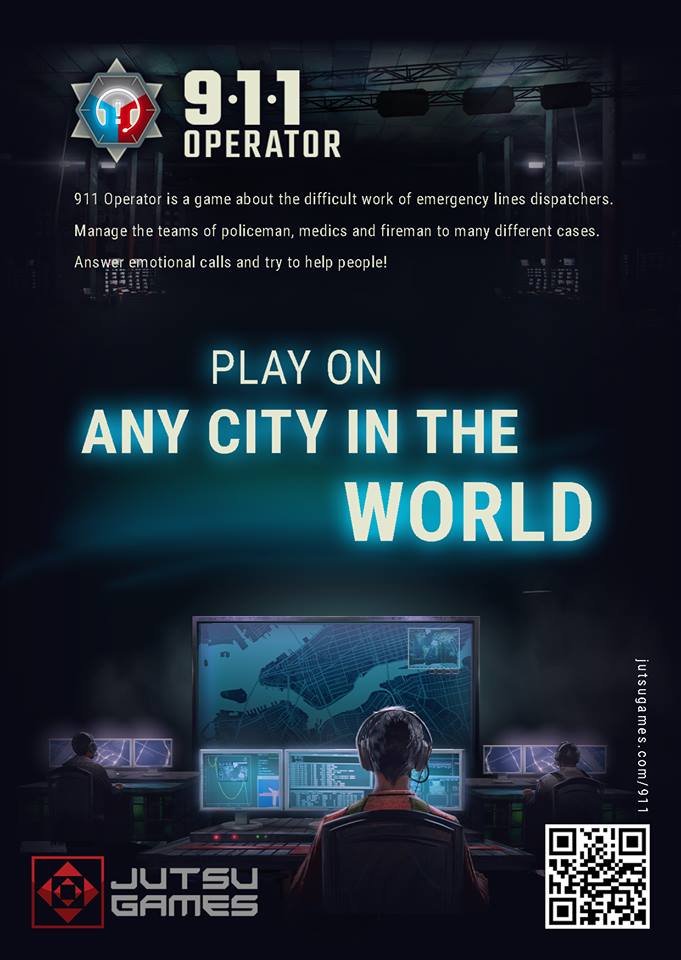