We. The Revolution game Trailer:

Become a Judge during the French Revolution; sentence thieves and murderers, but also your friends, all the while fighting to expand your influence over Paris.

Paris, the times of the French Revolution. The Player controls a Judge – an alcoholic and a gambler - of The Revolutionary Tribunal. His objective is to preside over court proceedings, judging people brought in front of him – revolutionaries and their enemies, criminals and ordinary citizens. Along the course of the story, the protagonist will be expanding his influence over XVIIIth-century Paris, but at the same time will be forced to fight for the lives of his family and his own.

The player judges criminals and counter-revolutionaries, but also innocent Parisians. The Judge has to peruse case files, study evidence, and interrogate the defendants in a way that ensures either justice... or the player's profit. Each decision will have an impact on the factions in Paris, the player's family, or the player themselves. The game will reward clever decision-making, allowing the player to - for example - outwit and defeat more powerful enemies.

Once done with court proceedings for the day, the player will return to the Judge's home for a dinner with their family, after which they will open a map of Paris, from which they can plan their strategy. The moves they will make can give the Influence Points, which will be the player's main resource during the game. To earn them, the player will utilize the Judge's subordinates – for example, the Spy can uncover useful information, and the Court Guard can convince someone to do the Judge’s bidding in ways less subtle than wordplay.

The player has access to the intrigue-building system, which lets them plan and execute political plots to eliminate their competitors. Using action blocks, they set up the right sequence of events; then carry it out, step by step, by reacting correctly to the enemy's counterattacks.

The game features a dynamic events system, making the player react to the people and political factions that surround them. Events can appear in any given moment, and sometimes completely shake up our strategy. A neighbor started spreading inconvenient gossip? Intimidate him or send thugs after him. An opposing politician is scheming to end your career prematurely? Get ahead of him and arrange for him to be assaulted, or use your Spy to dig up information that will let you send him to the guillotine.

Every faction in the game. Each of them has its own goals, and they don't coincide with the other groups' interests. There will be a Revolutionary faction featured, as well as a secret (initially unknown to the player) Aristocratic faction, pushing back against the revolutionary reforms. The people of Paris may be our enemy as well, especially if we keep making decisions against their interests (for example, sending a favorite of theirs to the scaffold). Even the Judge's own family may become an enemy, as it begins to fracture over the course of the story.

The player's main goals are to survive, and to have as much influence over Paris as they can manage. Depending on the player's priorities, the goal can also be our family's survival, or helping a specific faction defeat others. Choosing one goal means having to abandon the others.

Fans of the games “Papers, Please”, “This war of mine” or “This Is The Police”; enthusiasts of media in which the story and the emotions it provokes are no less important than the visuals; people who enjoy games featuring impactful moral decisions. The game will also appeal to the fans of the show “House of Cards” - “We. the Revolution” also explores the topics of political intrigue and power struggle, and the player character will have a lot in common with Frank Underwood.

- Recreating the atmosphere of XVIII-th century France during one of the most bloody periods of its history;
- Controlling a Judge – a character in a profession not much explored in games;
- Making moral decisions that will decide the fate of Paris' citizens;
- Tangible influence over the legislature of the French Revolution;
- Uncommon mix of genres;

“With an entirely hand-painted art style, with digital editing to add polygonal shapes, We. the Revolution is visually striking and entirely memorable.”

“We The Revolution is interesting because it could have very easily just been a game with good art and a good story but not all that much gameplay behind it. That would have been totally fine too, taking a more visual novel approach to tell a good story set during the French Revolution. Instead, you take on the role of a judge during that time, presiding over and deciding cases from big to small, some with historical figures.”

“I’m excited to solve a case on my own while grappling with the political and moral ramifications of my decisions in the final game.”

“Speaking of must-plays, We. The Revolution by Polyslash reminded me of one of my favorite games in recent memory: the choice-based political game Rogue State…”

“The game is in its early stages, but the game has potential to be very special.”

“The visual design in We. The Revolution is great, with everything having a faceted, polygonal look. The style is unique and distinctive, and looks great in motion in the game itself...”

[eng] “Developers sometimes like to brainstorm to offer us games that unfold in unusual universes. They also sometimes try to play roles that we have little use to play. This is exactly the case for We. The Revolution developed by Polyslash…”

“[Eng] We. The Revolution developed by Polyslash, is an interesting and unique combination of genres. Research mechanics, adventure elements, court drama ... And let's not forget the moral options that do not allow you to sleep at night.”

“...during Gamescom 2017 I was faced with one of the titles that struck me most in the German fair: talking about We. The Revolution, developed by Polyslash… Our title test was as surprising as it was appreciated, scattling at the top of the wait bar and the curiosity. “

“...at gamescom I was able to gain first insights and impressions, which I would like to summarize: Very interesting and ambitious.”

We. The Revolution  - in Top 10 Indie games from Poland 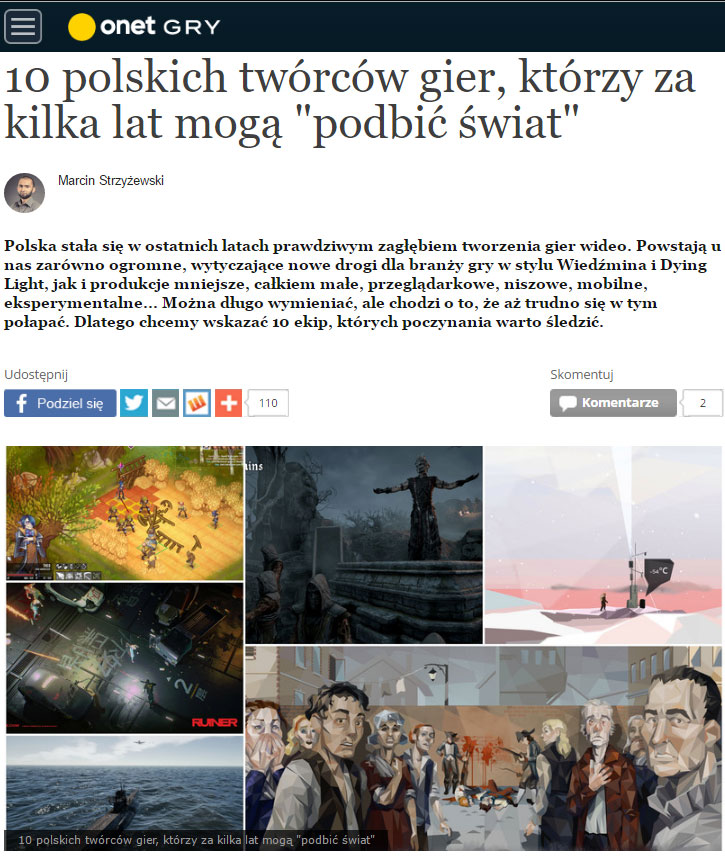